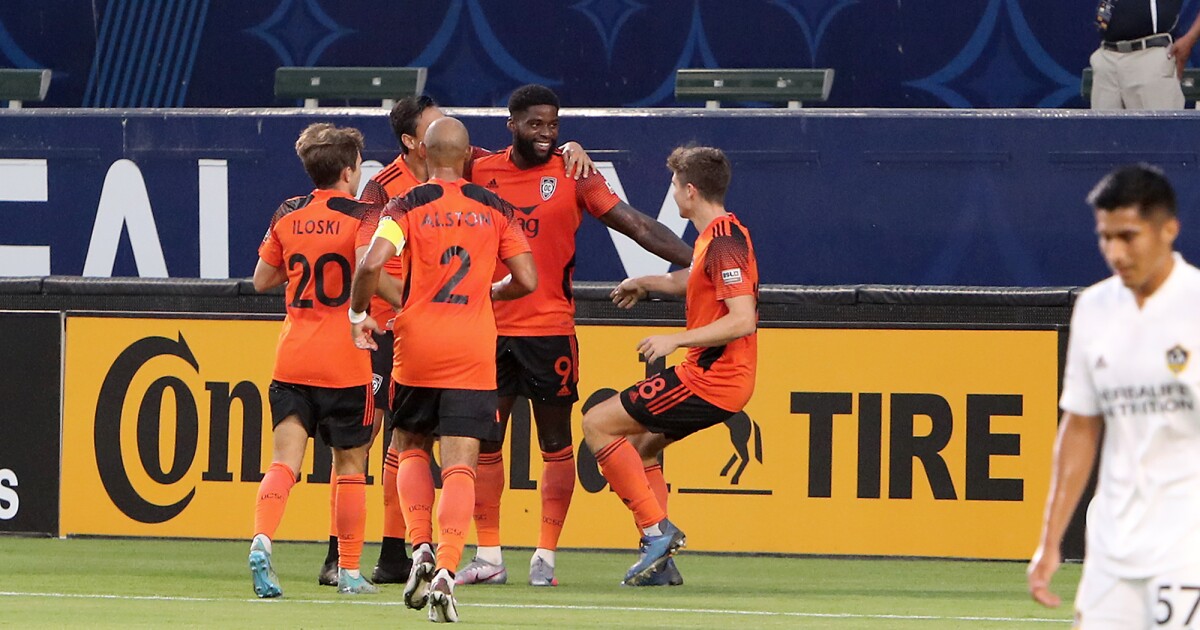 That streak could not be stretched further, but Orange County still found a way to stretch its winning streak to four.

Cameron Palmer had a goal and an assist to lead Orange County to a 2-1 win over LA Galaxy II on Saturday night at Dignity Health Sports Park. 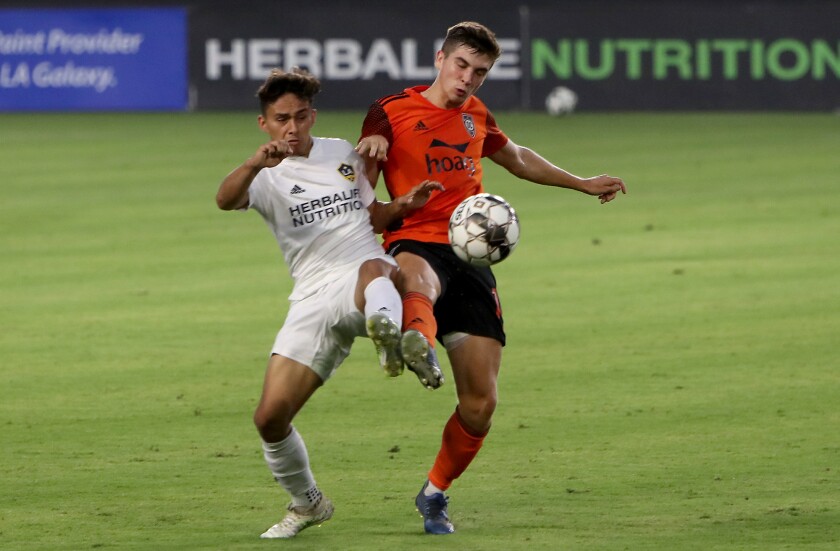 Orange County Soccer Club midfielder Cameron Palmer, right, battles against L.A .Galaxy II midfielder Jorge Hernandez during the first half on Saturday night. Palmer had a goal and an assist in the match.

Palmer corralled the ball above the 18-yard box, taking one touch before stepping into a right-footed blast that found the back of the net in the 59th minute, breaking a 1-1 tie for the eventual game-winning goal.

“I want to start adding goals and assists to my game,” Palmer said. “Everyone just keeps telling me to shoot more, especially my dad. He’s getting on me for not taking shots in games, so coming into the season, I just set myself some targets to try to hit, and so I’m just fortunate today that I got a goal and an assist, but also more importantly, get the win for the team.”

Los Angeles is now 3-3-0 (nine points) and in fourth place. L..A Galaxy II had been 2-0-1 in its previous three meetings in the series with Orange County.

Orange County opened the scoring with a pair of precision passes leading to an early goal. Daniel Finlayson sent a pass down the right end to a streaking Palmer. The center midfielder then produced a right-to-left cross in the air to the far post for Sean “Ugo” Okoli, who finished it off in the 14th minute. 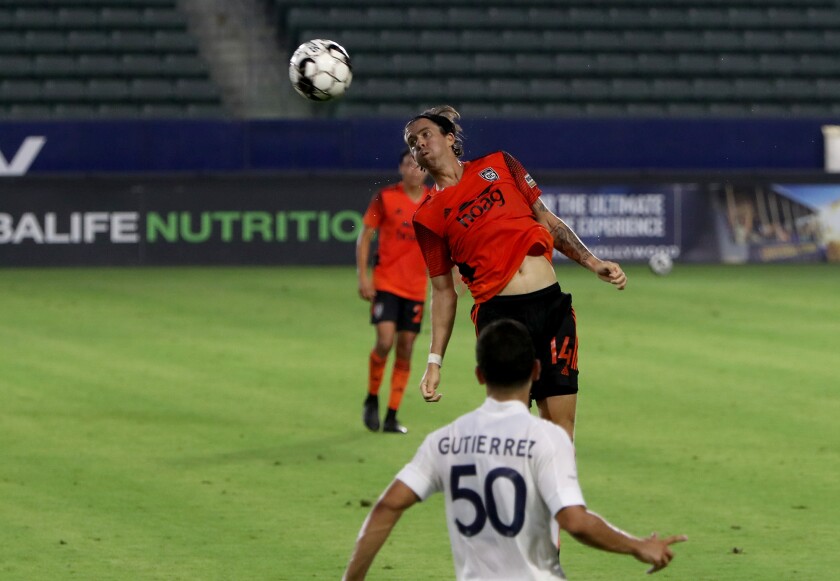 Both teams had chances for more in the first half, with Los Angeles producing some quality chances as the half went on.

Aaron Cervantes got the start in goal for Orange County after relieving Frederik Due (groin tightness) at halftime in the team’s previous match, a 1-0 win at home over Las Vegas Lights FC on Aug. 15.

“Aaron’s done a fantastic job,” Orange County head coach Braeden Cloutier said of Cervantes, who used to play for the L.A .Galaxy academy. “I think last Saturday, when we played Las Vegas, he came in at halftime in a really difficult situation and time of the game, and it just shows his maturity and his evolution and his development.”

In the 27th minute, Cervantes came way off his line to stop Williams, who had come open through the middle of the defense on a ball played through by Jorge Hernandez.

Nine minutes later, center back Rob Kiernan made a sliding tackle against Williams on an entry pass near the six-yard box, turning a scoring opportunity for the Galaxy into a goal kick.

Cervantes would have to make another key stop in the 78th minute. He came out to disrupt a pass to Williams. The ball bounced away from him, and Williams appeared to have an uncontested look to tie the score once more, but Cervantes dove on the ball before the shot could be taken.

Orange County has earned points in every match this season, and it has outscored opponents 7-2.

Up next for Orange County is another road match against Las Vegas Lights FC on Tuesday at 7 p.m. 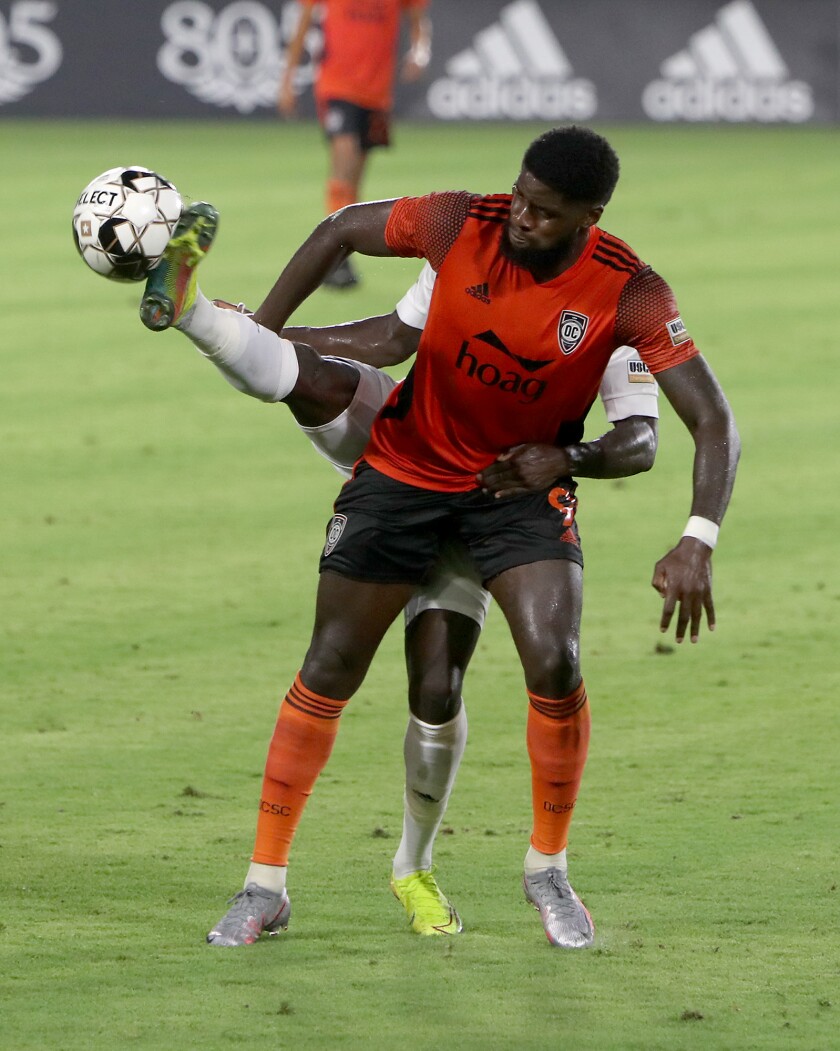 close Video The LA Galaxy condemned social media posts by the wife of one of its players Wednesday. Aleksandar Katai’s wife, Tea, posted on her Instagram story a profane call to “kill” protesters and also called them “disgusting cattle” amid the demonstrations to protest racial injustice and police brutality in wake of the death of […]

The item that you have requested was not found. Possible causes: The address was entered incorrectly The item no longer exists There has been an error on the site If you feel the address you entered is correct you can contact us, mentioning the error message received and the item you were trying to reach. […] 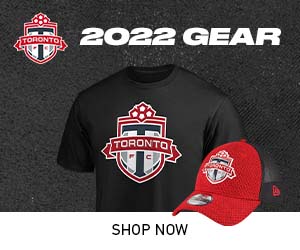