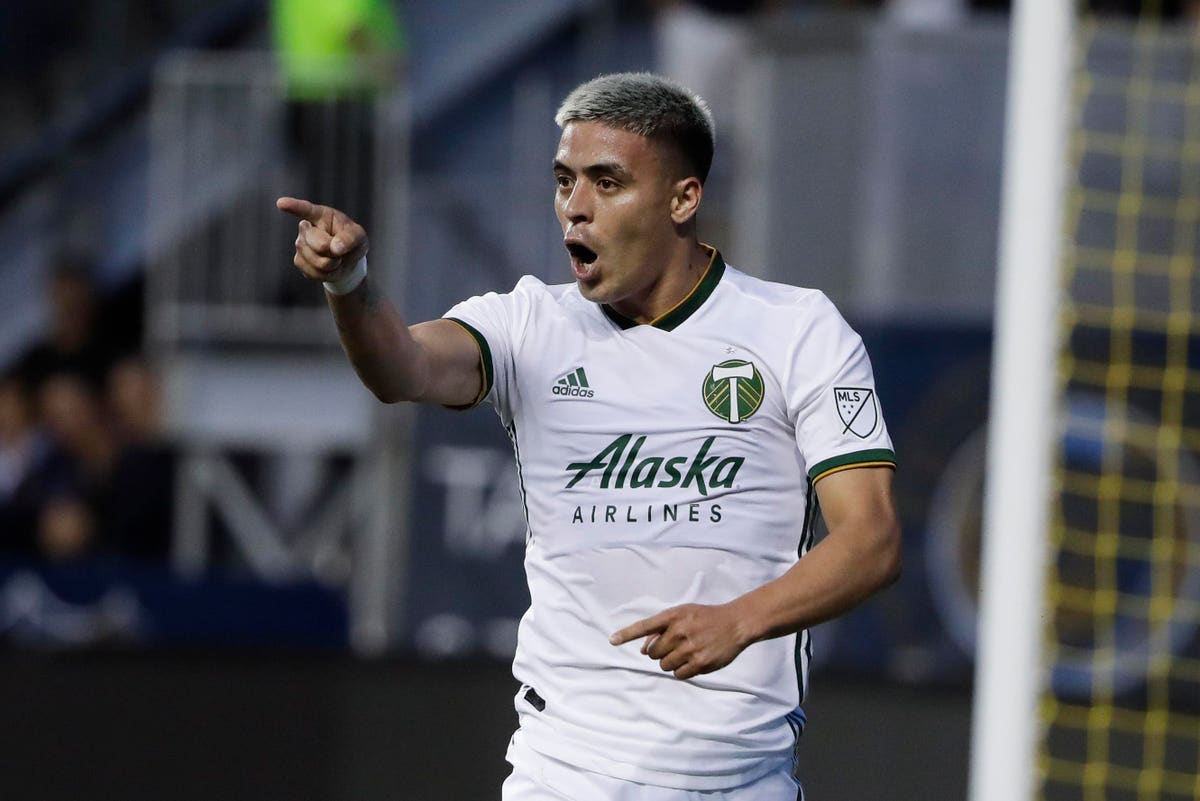 Portland Timbers forward Brian Fernandez celebrates after scoring during Saturday’s 3-1 win over the… [+] Philadelhia Union. Despite sitting in 10th place in the MLS’ Western Conference, the Timbers are a near-lock for the MLS postseason if past history is any indication, after beginning the season on a 12-match road trip.

The Portland Timbers beat the Philadelphia Union 3-1 on Saturday to wrap up a Major League Soccer record 12-game road trip to open the season with 14 points. As a result, coach Giovanni Savarese’s squad has a 74 percent chance to make the MLS postseason, according to statistical analysts FiveThirtyEight.

History suggests the real probability is closer to 100 percent.

In a league where almost nothing is a sure thing, making the playoffs after a long road trip to start the season — usually to allow for the completion of a stadium project — is as close as it gets. And it’s getting to the point where it’s becoming a question of competitive fairness.

Since MLS began accelerated expansion, from 12 teams in 2006 to 24 currently (with a target of 30 set for the not-too-distant future), 11 clubs have begun the season playing either at least their first five games away, or at least eight of their first 10.

Only the 2010 Philadelphia Union — who were in their expansion season — failed to make the playoffs.

And despite growing evidence that such a start stacks the deck in a team’s favor, it’s become more common the last two seasons.

The Timbers are in line to benefit for a second consecutive season. They started 2018 with five away games while awaiting the first stage of renovations to Providence Park, before going away for even longer this season to allow the second phase to be completed.

Along with Portland, D.C. United and LAFC began 2018 with extended road trips and eventually made the playoffs. Minnesota United and the Montreal Impact join Portland this season, and of that trio FiveThirtyEight gives Minnesota the lowest postseason probability at 61 percent.

Can such a trend be explained by some sort of lurking variable? Maybe. Particularly, teams who are moving into new facilities may have owners who are more motivated to invest financially into improving the product on the field.

In terms of roster building, teams with a later home opener often have a backloaded schedule overall. That means any players signed in the middle of the season may have more games in which to make an impact.

For example, Portland forward Brian Fernandez could feature in as many as 24 games after signing at the close of league’s primary transfer window and debuting on May 15. Had Fernandez signed with Montreal or Columbus, for example, his ceiling would’ve been 21 matches.

Similarly, D.C. had 20 games remaining when Wayne Rooney made his debut last season as the secondary transfer window opened. On the same date, eventual MLS Cup champions Atlanta United had only 14 games left.

Games in hand can also help a coach manage his squad rotation. A coach facing  a five-match, 15-day stretch in April or May might be tempted to try and push his regulars through as many minutes as possible. If the same stretch comes in September, it’s easier to look at the schedule and standings and figure out how many points a team realistically needs, and plan accordingly.

And in a league where teams are required to fly commercially to most matches, travel wears on players as much as schedule congestion. It’s not easier to fly commercial in March, April or May, but players are at least doing so with less cumulative wear on their bodies.

Nothing is a guarantee in a league that has seen six champions in the last six seasons. And the blame shouldn’t be on the Timbers or any other club that wants to build or upgrade facilities. On the contrary, new construction is a cornerstone to MLS’ long-term viability, a fact that probably makes the MLS front office amenable to accomodating clubs that undertake it.

But the trend of early season road trips leading to late season playoff runs looks likely to continue in 2019. And as the league continues to expand, it may need to reconsider the scheduling leeway it grants teams opening or renovating stadiums.

Gamethread: the eight-goal shootout in Portland

Feel the glory of a Dempsey Hat trick in a baseball stadium on Youtube at 1pm. FULL STORY <!– END ADVERTISER: PrimeSport.com (US) from awin.com —